As my kids and I ducked under some trees to find relief from the hot sun, we stood next to the Reflecting Pool and looked up at the Lincoln Memorial. I wanted to grab their attention and take them back to 1939, so they could experience Marian Anderson’s concert for themselves…this is how I did it.

I shared a brief background that sounded something like this…Franklin D. Roosevelt was President and the daily headlines talked of the threat of a European War. (They DID end up going to war, which was World War 2!)

Side Note: You really do write “a European” not “an European”. I looked it up. Haha

Other notable events that happened this year was…

Today though, we’re going to experience an amazing concert that was came about because of a series of unfortunate events, but which helped set the stage for the civil rights movement.

Who was Marian Anderson?

In the spring of 1939, a famous opera singer, Marian Anderson, who had sung in Carnegie Hall, the White House, and all over Europe wanted to perform at Constitution Hall in Washington, DC. The DAR (Daughters of the American Revolution) owned the hall, and told her that they didn’t have any dates available, but that wasn’t true! They only told her that because she was African-American and they had a policy that only white performers could use the hall.

You need to understand that at that time, Washington, DC was still a racially segregated city, which meant that black people and white people had separate bathrooms, sat in different sections of performance halls and cafes, and more. (You can see the Greensboro Lunch Counter at the National Museum of American History.)

When people found out what had happened they were so mad! One of those people was Eleanor Roosevelt, the President’s wife! She and her husband, President Franklin Delano Roosevelt, had invited Marian to sing at the White House a couple of years before in 1936 and were not happy with the DAR’s decision.

Eleanor Roosevelt was a member of the DAR, but she ended up resigning from the Daughters of the American Revolution in February 1939, because they wouldn’t allow Marian Anderson to perform.

The very next day Mrs. Roosevelt wrote about it in her newspaper column. She never actually said anyone’s name, but everyone knew what she was talking about and why she had resigned. According to the FDR Library, “Mrs. Roosevelt told her readers that in this situation, “To remain as a member implies approval of that action, therefore I am resigning.” She then worked with others behind the scenes, so that Marian Anderson could sing a concert at the Lincoln Memorial.

Instead of Marian Anderson singing for an audience of 4,000 people at Constitution Hall, she sang for 75,000 people from the steps of the Lincoln Memorial on Easter Sunday!

Get Ready to Travel Back in Time

You’re about to watch that concert! It happened RIGHT HERE, but I want you to imagine people all around you, you can’t even turn around without knocking into someone else. There were so many people here!

You also won’t see Eleanor Roosevelt there. She didn’t attend the concert, because she wanted Marian Anderson to shine! You’ll see the Secretary of Interior, Harold Ikes, though and he was someone who also worked really hard to make this concert happen.

Ok, before we start the video, look up at the steps, right in front of the opening to the statue of Abraham Lincoln so you’ll recognize it in the video…now, close your eyes and listen to all those people all around you. Feel the breeze and listen. When you hear the news broadcast begin, open your eyes, and you’ll be here on April 9th, 1939.

Eleanor Roosevelt and Marian Anderson remained friends for the rest of their life. These events brought the country’s color barrier to the forefront and helped set the stage for the Civil Rights Movement.

Questions to Ask Your Kids While at the Lincoln Memorial

You can easily lead this discussion in a couple of directions. You could talk about the Civil Rights Movement and stay right where you are, transport them to 1963, and have them see Dr. Martin Luther King Jr. giving his famous “I Have a Dream Speech”. You could then walk up the steps and see where Martin Luther King stood and spoke before exploring the Lincoln Memorial.

OR you could ask a question to gently lead your children into a discussion on discrimination, respecting others, and having the courage to stand up for what they believe is right.

Written by: Caroline M. Harper
I create fun interactive virtual tours and escape rooms for kids by curating the best stories and facts that spark their curiosity. I started the Field Trip Club in 2011 to help families make stress-free memories together. 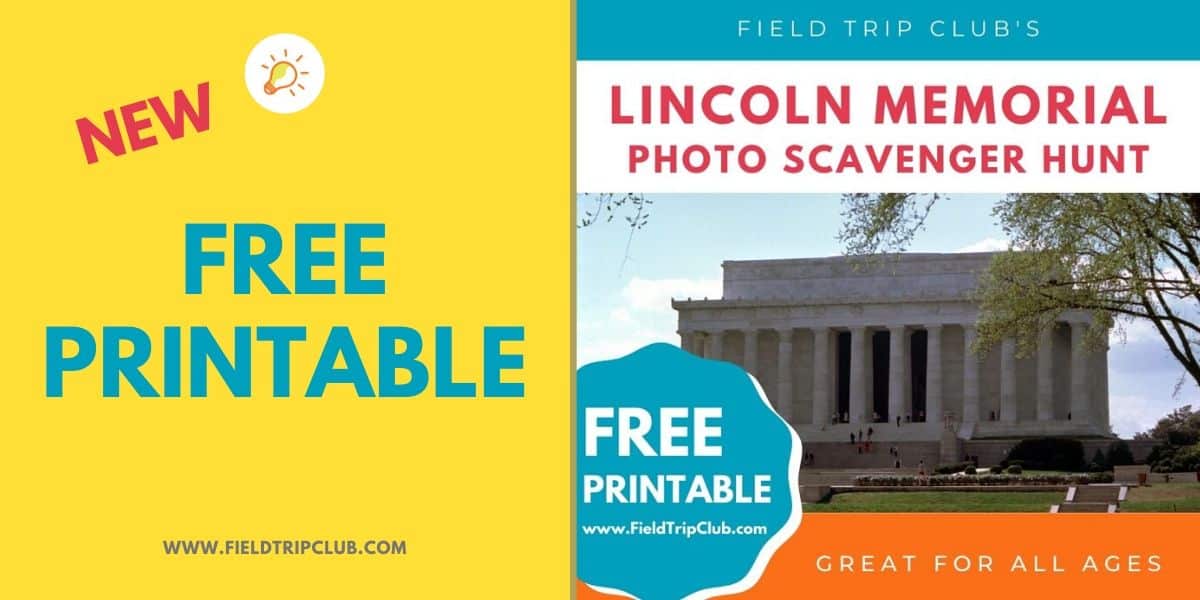 Get the kids excited to visit the Lincoln Memorial with our FREE photo scavenger hunt for the...